Buying the right gaming keyboard can be a challenge, considering there are already lots of them in the market with their own designs and different features. It just really depends on what you prefer on a gaming keyboard and the features that come with it. Investing in a gaming keyboard can also be one of the reasons why some gamers are hesitant to put their money on it for they fear that the more feature it has, the more expensive it is, but that is not always the case. There are keyboards that come with a lot of good features, but still friendly on the pocket.

If you are on a tight budget but still want a great gaming experience, then Corsair K55 RGB Gaming Keyboard might be for you. Besides having a lot of great features, it is also consumer-friendly when it comes to budget. 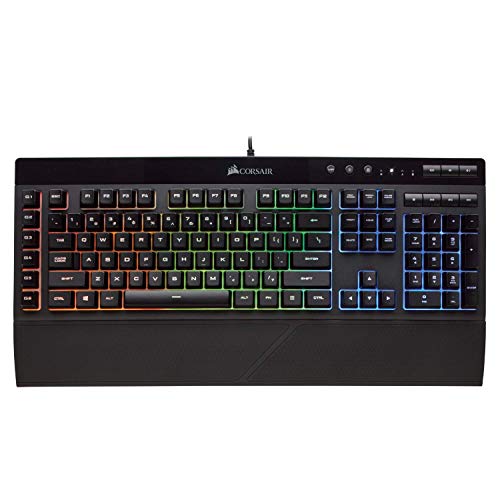 Corsair has released different gaming keyboards for the past year with more and more features being added and modified on them. This Corsair K55 RGB Gaming Keyboard is one of their latest models for aspiring gamers out there.

This keyboard is not like any other former Corsair released keyboards, due to its features, structures and the target market for this kind of keyboard which will be discussed in this article.

Who is this keyboard meant for?

When you flip over the keyboard, you will see four rubber pads to avoid scratching your desktop surface, plus two feet to elevate on its backside. The keyboard also includes a detachable wrist rest. It is not magnetic, however, it does snap at the bottom of the keyboard which also has a neural-like texture to it. The overall keyboard itself is extremely lightweight due to its plastic construction.

The K55 has membrane switches or a membrane keyboard. This means that this is not a mechanical keyboard since there is no key switch. The membrane keys were also used from past models of Corsair like its Raptor lineup. There is an RGB light embedded deep inside that will shine through the white surface underneath all the keys. It also has a white backplate for RGB lights for the reason that it is going to shine up and through that and once it reflects back onto the white surface, it will appear more saturated and bright. This feature definitely adds more visual pop to the keyboard, and make the gaming experience even better.

K55 features a three-zone RGB backlighting which also comes with 12 pre-configured lighting modes. Pressing FN+1 will enable the first preset mode which is zone one being red, zone two being green, zone three being blue. FN+2 is going to be yellow, cyan and purple while FN+3 will be blue, cyan and red, FN+4 is purple, green and yellow. FN+5 is orange, purple and cyan, lastly, FN+6 is going to be green, blue and white.

FN+7 is by default which the user can create his own three-zone lighting effects. When you press FN+F1, you can go through and cycle whatever color you want for that particular zone. You can pick from red, green, blue, yellow, cyan, orange, purple and white. FN+8 is going to let you cycle through the same color on all three zones, while FN+9 will be a pulse on all three zones so the colors are going to pulse in and out. FN+0 is a color shift where the colors are going to shift from one color to the other. FN+- is going to be pulsing the three-zone lighting that will basically go through function one to function six lighting effects. The bonus is FN+= which is the rainbow lighting effect that does a great job emulating the colors accurately and fluidly.

This keyboard has six dedicated macro keys which are great for mobile players and photo or video editors as well. The keys also come with a macro record button so you don't need any software which is a big plus. On the top left of the keyboard, you will find dedicated media keys that have three keys for volume and four keys for playback options.

An alternative keyboard that is available is the Corsair Gaming K70 keyboard. If you do not mind spending a little more than the usual budget and also if you are conscious of the fact that the K55 is not a mechanical keyboard, the K70 can be a good alternative, considering the feel of the keyboard and the efficiency of the keys as well.

If you do not want to spend a lot on a gaming keyboard, then the Corsair Gaming K55 RGB Keyboard might be the perfect fit for you. It’s affordable while also boasting great features. The keyboard also lets you customize your own backlight effects. This keyboard is not only for PC gamers but also for mobile gamers and even photo and video editors who can really benefit from the macro keys that come with it.

The challenges you might face is that if you set your keyboard to the rainbow effect, it might have a lagging feel to the color transitions and since this is not a mechanical switch, it will be different when you use it for long periods of time. Overall, however, after all the details on this Corsair K55 RGB Gaming Keyboard review, considering the quality, the features this keyboard has to offer, and the price, this keyboard is a worthy purchase.