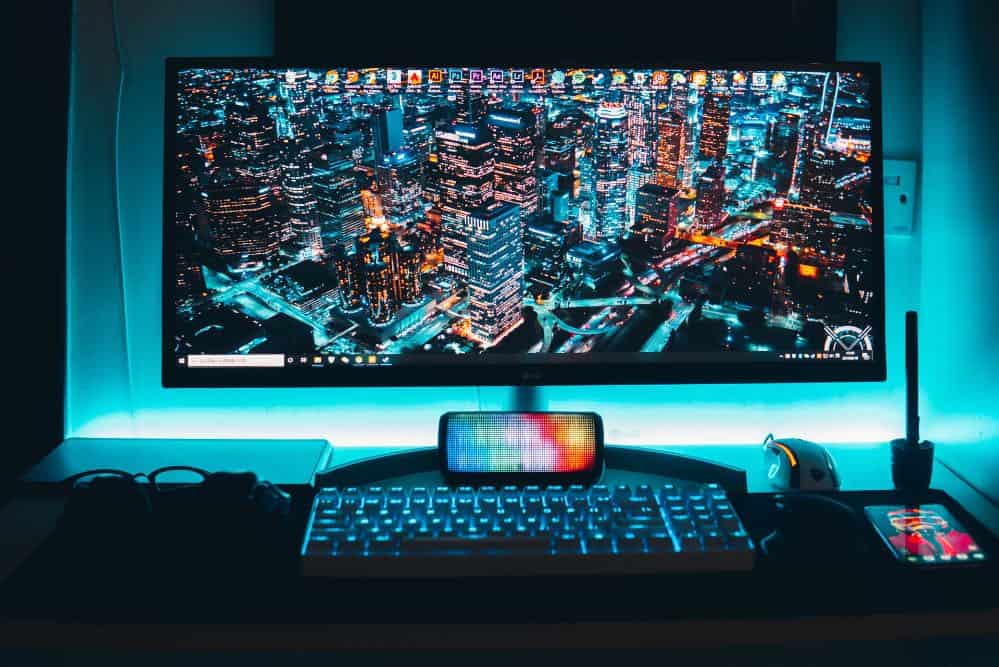 When it comes to gaming, a decent monitor is the most important peripheral gear. LCD and LED monitors are both easily found on the market, but which one is better for gaming?

LED monitors are brighter, have more contrast, and shorter response times, while LCD monitors are significantly cheaper and are generally better at preventing burn-in. Preference can vary on play style and aesthetic; however, LED monitors are usually preferred for gaming.

The differences between the two kinds of screens are small but important. Let’s explore in further detail below.

That doesn’t mean there aren’t significant differences that can affect your choices, though. When it comes to deciding which will be better for your setup, you should consider the price, power consumption, longevity, and components that it will be working with.

LCD monitors tend to be significantly cheaper than LED monitors, at the cost of some image quality. There are plenty of cheaper options on the market for both kinds, however.

The price of the monitor can depend on not only its quality but the brand and where you buy it, so you should compare options from both categories across marketplaces.

LED monitors are more efficient than LCD monitors, especially if you’re opting for an edge-lit display. This can be good for the environmentally conscious, as LED displays tend to have a lighter impact on the environment.

It can also be good for those on a strict budget looking to save in small ways, as a more efficient monitor means a slightly lighter electrical bill.

LED monitors tend to last significantly longer than LCD monitors. They’ll have fewer technical issues over their lifetime and can last upwards of 100,000 hours. In comparison, most CCFL monitors will last between 20,000 and 40,000 hours. This might make them more economical in the long term if you can manage the higher upfront cost.

Your Mileage Will Vary Based on Other Factors

If your PC has only basic hardware, having a top-of-the-line monitor will not improve the game or the experience. Consider monitors that match your components in terms of quality and capability.

LED Monitors Are the Better Option

Considering all of this, there are a few different answers to which monitor is better. It comes down to exactly what qualities you’re looking for in your monitor’s display capabilities, and how much you’re willing to invest in it.

With this in mind, in terms of quality, longevity, and interaction with other components, an LED monitor is the best balance between feature and cost. The best, middle-of-the-road option is investing in a direct-lit option, which will give you some of the dimming capabilities of a full-array monitor without the glare issues of an edge-lit display.

Video: LCD vs LED vs OLED - Which one should you choose?

LCD Monitors: How They Work, Advantages and Disadvantages

LCD, or Liquid Crystal Display, monitors are the direct successors to cathode-ray tube (CRT) monitors. They are made up of, of course, liquid crystals. These are structures that land somewhere between a solid and liquid, behaving as both simultaneously. This allows them to move and change depending on the current running through them.

LCD monitors are structured with five layers, starting with the backlighting of cold cathode fluorescent lamps (CCFLs), then a separation sheet, followed by the liquid crystal sheet and the color filters, finished off with the actual glass screen on the front. This setup means the entire screen is lit evenly and will have uniform brightness levels.

One distinct disadvantage to LCD monitors is that, like their CRT predecessors, they must be a certain thickness to function. You won’t be able to get the razor-thin aesthetic with these devices; they just can’t physically be smaller than their layers allow.

LED Monitors: How They Work, Advantages and Disadvantages

LED monitors operate, unsurprisingly, through light-emitting diodes. These replace traditional LCD monitors’ fluorescent lighting. LEDs mean that the display can be of a higher quality and detail.

LED monitors can be lit in three different arrangements.

Unfortunately, LED monitors tend to be more expensive than standard LCD monitors, especially full-array monitors. Edge-lit monitors tend to be cheaper, but are not good for gaming because of the uneven lighting of the screen, which can make playing from different angles (such as leaning back in your chair or two-player setups) much more difficult.

Other Things to Consider When Buying a Monitor

The type of display might be the most important aspect of choosing a monitor for your gaming setup, but it isn’t the only important factor. There are a few more components to choosing the right hardware.

You should also consider what additional features you would like on your monitor. This can include considering built-in speakers or stand-alone and whether or not it includes a webcam (which can be important for streamers).

It’s also important to think about how your monitor will be mounted. This, again, comes down to personal preference. Monitors with built-in stands are more stable, but those mounted to a swiveling or adjustable stand can match the angle of your chair or standing position to decrease eye strain.

LED VS LCD Monitors: It’s About You

Overall, your monitor should be the one that matches your budget, aesthetic, and quality needs. It should be matched to the components it is operating with and the style of games that it’s being used to play. We want a monitor that will last a long time, and be worth the investment that you’ve put into researching and choosing it.