The primary difference between Gateron and Cherry switches is the Gateron linear switches are much smoother. Their tactile switches like Gateron browns also have a slightly less bump when actuating than Cherry tactile switches. It brings a whole new typing and gaming experience and is growing quickly in popularity within the Mechanical Keyboard community.

There's a reason Cherry MX switches are still regarded as the industry gold standard of high-quality mechanical switches for gaming keyboards. Their switches represent what a reliable keyboard switch should be like, especially when it comes to gaming where expectations are higher. Gateron mechanical switches were introduced later and is essentially a clone of Cherry MX switches.  You can read our more in depth review of Gateron Switches here.

Both have different colors, the price difference, actuation force needed, sound levels, and each with its individual properties.
Below is a quick comparison table of Gateron vs Cherry overall, which will give you a high-level view of some of the key differences.

Overall I would have to say that Gateron takes the crown, mainly because of it's really good price point but still decent durable switches that are often smoother and quieter than their Cherry MX counterparts.

Their tactile switches fall slightly short of Cherry, for example the bump on Gateron Browns are less pronounced so have less tactile feedback on down press. Some people actually like that though since it might feel smoother while still having a litle bit of tactile feedback.

This is where I feel the Gateron switches really shine, like Gateron Reds, Blacks and Yellows.  Their linear switches are silky smooth and are a great option for gamers or people who prefer linear switches (without a bump) over tactile switches.

Price is obviously a big factor for lots of gamers when choosing between keyboards and switches. The standard Gateron switches are cheaper than their Cherry MX counterparts in general.  The fact that standard Gateron's switches were made as clones of Cherry MX switch and copied their design is probably another factor in them being cheaper.

However, both Gateron and Cherry MX have some more expensive niche switches that many people are happy to pay extra for.

Yes, they are compatible. Gateron, Kailh, Outemu, Razer, and other Cherry MX clones all share the same PCB, plate, and keycap dimensions. The bulk of third party or artisan keycaps will be designed to work with and swapped out for any of these makes of switch keycaps.

Both are clicky switches and more suited to typing than gaming overall. The Cherry MX Blue click is a little softer, and the Gateron Blue a bit sharper. I like the click of the Gateron Blue switches, it's also cheaper.

Cherry MX browns feel a little 'scratchier' than Gateron browns in my opinion. The Gateron brown's bump is also feels a tiny bit more pronounced, maybe something between a Cherry MX brown and Cherry MX Clear. I don't think there's an outright victor in the brown switch category but maybe the cheaper price leans it a bit to Gateron again. 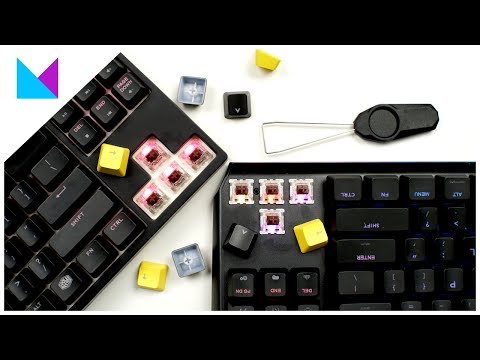 Gateron and Cherry MX Red are both linear switches. That means they don't have a tactile bump or definitive click. Along with their faster actuation due to lower actuation distance means they're geared towards gaming. I couldn't really tell much of a difference to be honest. Gateron might bit ever so slightly smoother.

The Gateron Black definitely felt smoother for me. The Cherry MX Black just wasn't as smooth and maybe slightly scratchy compared to the Gateron. So Gateron Black the clear winner.