Gaming Monitor vs TV: Which one to Choose? This is a question we often hear a lot of debate about, mostly because of the whole "Console vs. PC Gaming" debate amongst gamers. Console gaming is basically synonymous with TVs because they're more often than not located in the living room, while gaming monitors are the preferred display output for PC gamers because it's just another piece of hardware for their setup. It's always just been the obvious go-to options for the respective gamers.

However, more and more, we are seeing console gamers moving toward gaming monitors, especially if they already have a gaming PC setup that they can switch back and forth from. This once again raises the question - between a gaming monitor and TV, which is better for gaming?

The Differences At a Glance

Before we dive right on in, let's take a surface-level glance at the differences.

Gaming monitors tend to be smaller but with higher specifications, such as their much higher pixel density and refresh rates. However, these specifications aren't always geared towards color reproduction. This is where the TV steps in.

Gaming monitors are better for creating a crisper, more responsive display. Still, TVs are better for those who want a better viewing experience through color reproduction and wider viewing angles, rather than through a staggering number of pixels crammed into a monitor and better response times.

The specifications change between the two because of what you would generally use them for, so it makes sense that the TV is better for distant, passive viewing, while the monitor is better for a more active and responsive display from less of a distance. 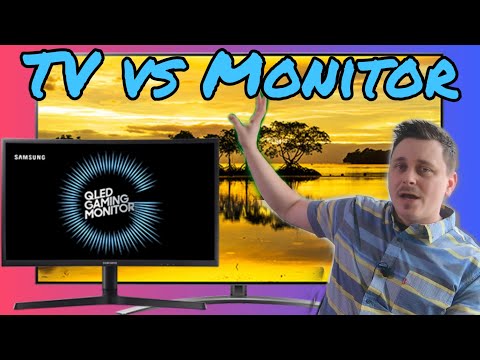 Modern TVs are now made to have 1080p or 4K resolution, with gaming monitors having both those options and 1440p, which is an in-between resolution.

In most cases, TVs are better for general viewing experiences than gaming monitors because they are specifically manufactured for that purpose. IPS monitors help even the playing field a little, as they can almost compete with TVs thanks to their improved viewing qualities.

HDR removes this competition entirely, however. HDR, or High Dynamic Range, is used in newer 4K TVs, which use the HDR10 standard for much better color reproduction and contrast between black and white.

Very few monitors within an affordable price range support HDR, but even if you manage to find a monitor with HDR support, most PC content doesn't have HDR support built-in. With consoles, the PS4 Pro, Xbox One S, and Xbox One X have built-in HDR support.

Input lag is a massive factor for many gamers, with many claiming that their setup is unplayable when it gets too bad. When we moved from CRT to flat-screen HDTVs, gamers began to notice a massive input lag because these new displays used their own dedicated graphics processor for higher resolution signals for cleaner images and smoother movement on-screen.

CRT TVs never had this issue for gamers, as they never had their own dedicated graphics processor to rely on. This has led to a new "Gaming Mode" on HDTVs, which you can select to minimize the input lag.

Gaming monitors don't even need a separate mode for reducing input lag, as they are far superior across the board in this regard. In fact, they've been getting even better at lowering input lag thanks to the existence of 144HZ monitors, leaving TVs behind in the dust.

Before we jump in and discover the best refresh rates, let's take a look at syncing and sync technology. Nvidia and AMD offer us a type of sync technology, called G-Sync and FreeSync, respectively. This technology dynamically matches the refresh rate to the frame rate, removing screen tearing and increasing the smoothness of movements.

These technologies are very similar and do the same task. They come from different companies but are both very well supported by most gaming monitors.

TVs are less straightforward when it comes to refresh rates. Very few TVs support G-Sync and FreeSync. Most high-end ones do, but it takes a lot of money and technical knowledge to make your TV compatible if it isn't.

To further separate the term "displays" in terms of refresh rates, both have refresh rates but handle them differently. 120Hz is a typical refresh rate for both TVs and monitors.

A 120Hz monitor will be decent for gaming across the board and will even be able to eke out a few extra frames than what your PC produces.

It gets more complicated on a TV, though. 120Hz on a TV is not the same 120Hz that you get on a gaming monitor, leading to what is known as the "Soap Opera Effect" when gaming. This is because TVs with high refresh rates use a technology called "Interpolation" to reduce ghosting and to make movement and motion smoother.

The Soap Opera Effect is when the interpolation affects the display and makes the movement far too smooth to be natural, leading to creepily unrealistic movements on screen.

Sometimes, the defining factor between the two can be the comfort factor, which is especially true for console gaming. As we stated before, the console experience is synonymous with TVs and living rooms, which means you're most likely sitting on the sofa relaxing. Because of the larger size, TVs are preferred for greater viewing distances, such as when you're lying in bed or lounging on a couch.

Monitors force you to be closer because of their smaller size, so you'll more than likely be at your desk. This is less comfortable for most people than lying in bed or on a couch, even with an expensive gaming chair. Of course, for most PC gamers, the comfort factor wouldn't be an issue when the other benefits of the gaming monitor often outweigh the comfort of a sofa.

Monitors do not have the best viewing angles, with most being built for being placed squarely in front of you, with the screen being parallel to your view. IPS monitors do have better viewing angles than most, but only just barely, and they are also far more expensive and aren't worth it just for the additional comfort. This is especially true for gaming, as you won't be looking at the monitor at an angle in most cases. This makes viewing angles a redundant argument in most cases.

Final Verdict - Gaming Monitor vs TV: Which One is Better?

To answer the question of which one is definitively better for gaming, we have to give the crown to gaming monitors. When it comes to gaming, in particular, the only real advantages that the TV has over the monitor is the more comfortable viewing distance. The gaming monitor beats it in basically every other technical specification from refresh rate to resolution and pixel density.